Fairtrade in Keswick at Christmas – and at COP 26: Trees are our Friends 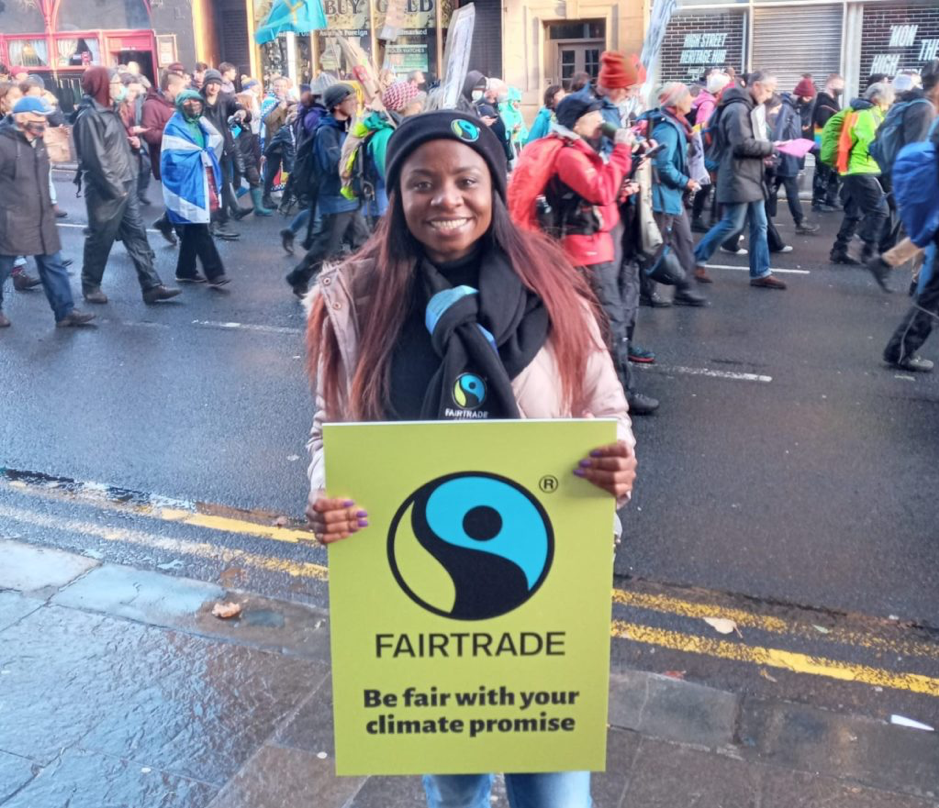 28 Jan Fairtrade in Keswick at Christmas – and at COP 26: Trees are our Friends

Posted at 10:05h in News by Ruth Burgess
Share

In December Keswick Fair Trade Campaign had a stall at the Victorian Fayre, sharing it with the Caldbeck  Fair World Shop.  The Fair World Shop sold a goodly number of  fair trade products while the campaign called attention to the needs of Fairtrade farmers and indeed all small farmers in the developing world.

We also had a table in Booths showing all the Fairtrade items that can be bought in the shop.  And Bernadette Fagan created a striking tree for the Christmas Tree Festival in Southey Street Methodist Church.

As Boris Johnson pointed out at the COP climate summit in Glasgow, “Cocoa farmers in West Africa should receive a better, fairer price in return for protecting their forests”. Fairtrade farmers were present at the COP. Benjamin Franklin Kouame, a Fairtrade cocoa farmer from Côte d’Ivoire in West Africa, welcomed Johnson’ statement and added “promises  are nothing without action. The root cause of deforestation is poverty.”

As the stewards of their land, Fairtrade farmers want to farm in the most sustainable way possible.   But at present the survival of small farmers is at stake: their lives and futures are under threat as mudslides, hurricanes, and floods hit their lands, leaving destruction in their wake. Jenipher, who comes from a long line of coffee producers and has been growing coffee in the Mt Elgon region of Uganda for 30 years, gave a powerful speech in Glasgow. She described the steps her community have taken to learn new farming approaches including agroforestry, and in the process how nature has protected them, saying: “Trees are our friends, they are our guardians, they provide, they protect, they keep us safe from climate change. But we must guard them too, we must conserve them, protect them.’

She talked about her community’s ‘fight’ with climate change, describing rains that come ‘faster, quicker, without warning, causing great harm to our coffee’, creating an environment for locusts and coffee borers and diseases such as the coffee leaf rust to thrive. After becoming Fairtrade certified, learning to follow strict environmental criteria and farm organically, their community were able to access support from the Welsh government. With funding for reforestation and agroforestry, the community planted trees that provided food, shelter and helped to protect the soil. “The trees protect us against deadly landslides and help to nurture coffee from extreme weather. Had we not had protection from the trees, from the hailstorm that landed last year we would’ve lost our crops.”

So far the efforts of the richer countries to give financial help to support the global south have been inadequate. Responding to the final communique of the COP26 summit, Fairtrade’s Head of Delegation for COP26  Mary Kinyua, said:

Fairtrade farmers and citizens of the global Fairtrade movement will not let this stand. And we know that there are Fairtrade buyers and businesses and supporters who will stand with us, working alongside us day to day to do what we can and calling for action until promises are finally kept. We are doing our part, it’s time for the leaders to do theirs.

We in Keswick and beyond can remind our MPs of the promises made by a number of developed countries, including the UK, to redouble or significantly increase their efforts to deliver funds to support countries on actions against climate change.

And of course we can buy Fairtrade.