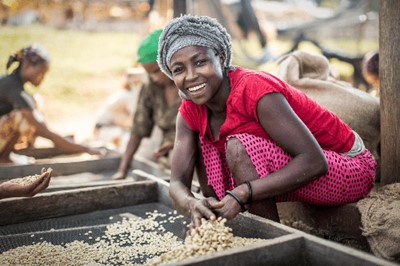 The 2019 AGM of the Keswick and District Fair Trade Campaign was held last week.  Two of the officers on the committee, Cath and Mike Glover, are leaving Keswick and they were replaced by Bernadette Fagan as Treasurer and Allan Daniels as Chair.  Reports were given by the Treasurer and the Secretary and a discussion then took place about the connections between Fairtrade and Climate Change.

Fairtrade products all come from outside the UK so there is a carbon cost in transport.  In order to avoid this cost we would need to give up drinking coffee and tea and eating chocolate and bananas! Moreover, the only product which is flown here are flowers: all the rest come by ship.

Developing countries have contributed the least to climate change and are currently the most affected. Fairtrade producers, together with very many small farmers in the developing world, are already suffering as a result of climate change to a much greater extent than we are. They have seen dramatic weather changes, in particular unpredictable rainfall and rising temperatures which have led to crop failures and an increase in disease. In particular, the impact of temperature rises on coffee bushes has been highly damaging.

Fairtrade has also developed a climate change strategy aiming to support farmers as they adapt to climate change challenges and work to mitigate their impacts. The strategy includes training  farmers in several methods of dealing with the problems of unpredictable rainfall by improving water use efficiency.  The introduction of drought tolerant varieties is helping coffee and rice farmers.  A Fairtrade Carbon Credit system has been introduced. Farmers are also encouraged to diversify so that they are not wholly dependent on their cash crop.

Fairtrade is thus helping farmers develop resilience.  We are all increasingly concerned about Climate Change: if we care about how small farmers  in the developing world are suffering then there is all the more reason to buy Fairtrade products whenever we can. “