Posted at 10:04h in Uncategorised by Joe Human
Share 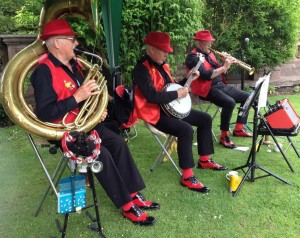 Speaking for the campaign Joe Human said: ‘We were so lucky. Predictions were for prolonged heavy showers with short sunny intervals.  But it was the other way round and the rain held off until ten minutes before the end.’

The event was attended by about 100 people, many of whom were local supporters, but many of whom were new faces. ‘We had been uncertain how well the event would transfer from Grange, where we had held it for the past 11 years, in the grounds of Malcolm and Judith Stonestreet’s home, but we need not have worried: it all worked very well.’

Speaking for the Castlerigg Manor Team, Fr. John Moriarty said: ‘In our work with young people we regularly draw attention to Fairtrade issues and it is a pleasure to support the Fair Trade group in promoting this in our local community. It was great that we were able to do this whilst allowing so many people to enjoy our gardens in the amazing weather on Sunday afternoon.’

Takings on the gate were about £580 and the raffle, with generous contributions from Lakes and Dales Coop and Booths, brought in another £160.  The talented Carlisle-based Ragtime Rascals again serenaded the event (see picture).